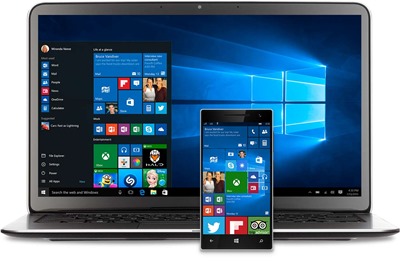 Back in 2012, Microsoft launched its first attempt at an operating system that coped with the inevitable collision of tablets and desktops. Regarded by most users as a flop, Windows 8 was typified as an awkward mismatch between touch friendly technology and more traditional desktop operating systems; in short, it didn’t work for either desktop or tablets users. Whilst the Windows 8.1 update helped, its lifespan was still most notably marked by headlines such as ‘’Windows 8, it really is that bad’’.

Ever since this failure, Microsoft users have been waiting on the arrival of a new and improved Windows. This time however, it seems things are different. Despite learning the hard way, Microsoft looks set to conclude what it started with Windows 8 back in 2012. Windows 10, its new operating system designed to be compatible with desktops, tablets and phones, was launched globally in 190 countries on 29th July 2015.

Whilst keeping hold of some of the original tablet features it created for Windows 8, Microsoft has also looked to further bridge the gap for users claiming it was too heavily centred around mobile devices by combining these with the more familiar start menu and desktop that Windows users have grown accustomed to over the years.

Add in an improved operating system with more security, a brand new browser and ‘Cortana’, an assistant not dissimilar to Apple’s Siri, and you might just start to get excited about Windows 10.

If you’re currently using windows 7 or 8.1 then there is good news, as upgrades from Microsoft will be free for one year under Windows free upgrades programme. However, if you’re not eligible for these free upgrades then Windows 10 Home will set you back £99, and Windows 10 Pro will cost you £131 for each license, but you do have the option to revert back to your old operating system for a month after your purchase.

Windows 10 is fantastic – smooth install. Everything just works, almost like a Mac! Edge is darn good too! A good last ditch effort by MS.

That’s the work laptop Windows 10’d, so far, so good. At least nothing broke on the upgrade

Never thought I’d fall in love with an operating system… but Windows 10 is just amazing!

Although not everyone was happy with the new operating system …

The mail app in Windows 10 is really bad. That could use a bit of work. I might look into another mail app to use.

At ECL continuously upgrading is part of what we do. For more information about how we can help your business, please call us on 01268 575300 or email us on info@ecl.co.uk